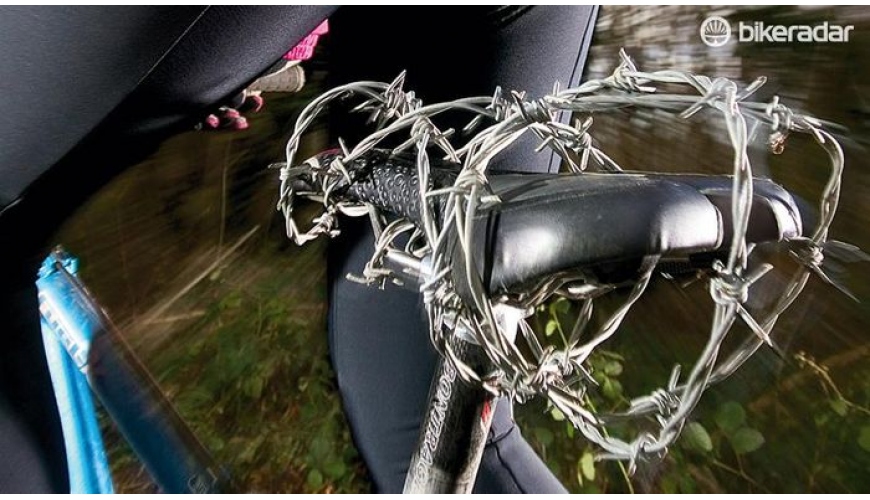 Saddle sores are an annoying side-effect of cycling that most serious riders have experienced at some time or other. At best they mean uncomfortable riding, and at worst they can keep you off the bike altogether.

Put simply, a saddle sore is an irritation of the skin that occurs in the area where you are in contact with the saddle, caused by chafing and sweating, among other factors. People new to cycling are often more affected as their skin isn’t used to the pressure and rubbing associated with sitting on a saddle for hours.

More experienced riders are generally less susceptible, but that doesn’t mean that they never get them. Sean Kelly, the Irish cycling legend, was forced to pull out of the 1987 Vuelta a Espana while leading the race with just two days to go, because he had sores so bad he could no longer sit on the saddle.

How to avoid saddle sores
Here are a few things you can look at to try to avoid the problem.

Choose your saddle
This is the most obvious thing to look at, but not necessarily the simplest. Just like every other part of our anatomy, the area that is in contact with the saddle is shaped differently from person to person, so you need to experiment until you find the saddle that is right for you, rather than going with a saddle that works for someone else.
Don’t just go for the lightest and most fashionable saddle, as these often aren’t the most comfortable. If you look at a lot of professional road cyclists, Tom Boonen being an example, they often favour slightly larger and heavier saddles rather than opting for their sponsor’s newest, lightest, minimalist design. When you are spending up to seven hours a day on a saddle, the hindrance of a few extra grams is easily offset by the comfort that a carefully selected saddle gives.

However, don’t assume that bigger and more padded is better. It’s the shape that is most important, and this will be where you’ll need to do your own experimentation. Saddle height and position also play an important role. Too high and you’ll be moving slightly side to side with every pedal stroke, causing friction, while having your saddle too low puts extra weight on that area. A level saddle is best in most situations.

Check your positioning
A proper bike ﬁt, especially seat height, can make a real difference and minimise side-to-side movement on the saddle.

Use a good chamois
Just as important as your saddle is your choice of chamois, since this is your skin’s first point of contact in your cycle shorts. Again, a chamois which is perfect for one rider might not suit another, but generally speaking, more expensive shorts use better quality material and have had more thought put into the design and shape. Look for a chamois with few or no seams, so that there is less friction against the skin.

Try chamois cream
Plenty of the pros swear by chamois cream. It works in two ways. Firstly, it kills off the bacteria which can lead to inflammation of the skin, and secondly, it acts as a lubricant and reduces the friction and rubbing between the skin and the shorts.

Keep them clean
Never use shorts two days in a row, even if you only did an easy ride in dry weather. Change out of your cycling shorts as soon as you get inside and shower straight away, making sure that you dry yourself well before getting dressed into your normal clothes. Make sure your shorts get a good rinse in the washing machine at the end of the cycle, and that they are completely dry before you use them again.

How to treat saddle sores
If you have already developed some sores, reduce your training volume on the bike, or cut it out altogether until symptoms disappear. The latter isn’t usually necessary, but in severe cases it is better to stop and allow yourself to get better than persist in pain, making things even worse.

This article was originally published in Triathlon Plus magazine, available on Zinio.